WASHINGTON, D.C. — Of six environmental problems facing the U.S., Americans remain most worried about those that affect water quality. Majorities express “a great deal” of worry about the pollution of both drinking water (56%) and rivers, lakes and reservoirs (53%).

Fewer, though still substantial minorities ranging between 40% and 45%, express a great deal of concern about the loss of tropical rain forests, global warming or climate change, air pollution, and the extinction of plant and animal species. Although less than half of Americans register the highest level of worry about these four issues, broad majorities say they worry at least “a fair amount” about each.

Bar chart. Americans’ levels of worry about six environmental problems. Majorities in 2021 worry “a great deal” about the pollution of drinking water and the pollution of rivers, lakes and reservoirs — 56% and 53%, respectively. Fewer, between 40% and 45%, express a great deal of concern about the loss of tropical rain forests, global warming or climate change, air pollution, and the extinction of plant and animal species.

These findings, from Gallup’s annual Environment survey conducted March 1-15, are the latest data points in at least two decades of tracking worry about these environmental problems, including annual updates every year since 2000, except 2005.

In general, the public’s level of worry has ebbed and flowed in tandem across the six environmental threats over the past 21 years. Although degrees of worry have shifted over time, the rank order has remained largely consistent, with water pollution outpacing all other threats.

The latest figures show significantly lower levels of worry than in 2000 on all issues except global warming, which is roughly on par today with 2000 after some fluctuation in the interim years. Worry levels across all six threats either ticked up or remained flat between 2019 and 2020 and are now at roughly the same levels as 2019. 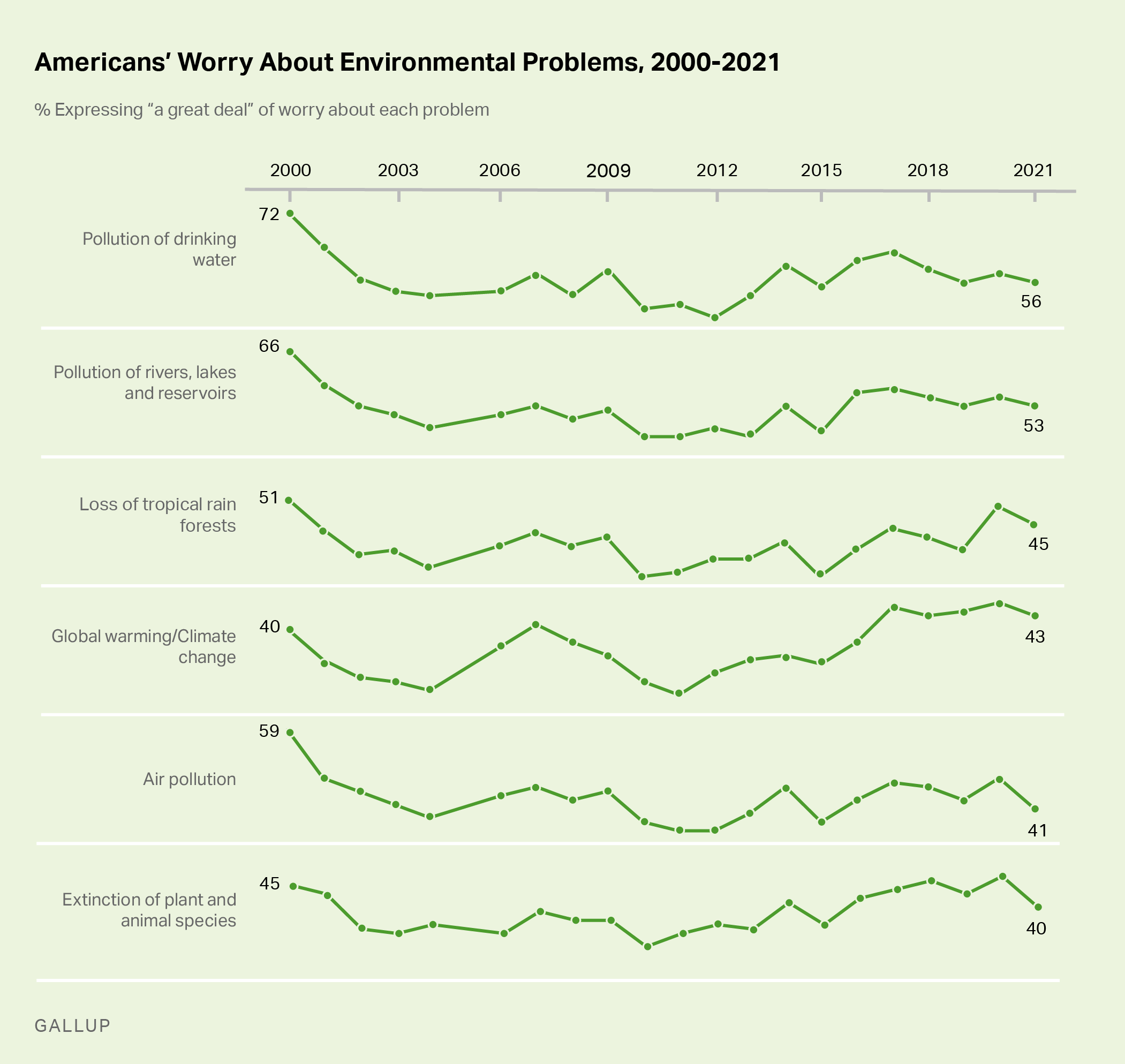 Line graphs. Trend lines showing the percentage of Americans who worry “a great deal” about six environmental threats since 2000. Except for global warming, worry for each of the threats in 2021 is lower than it was in 2000.

Partisan Differences in Levels of Worry About Environmental Threats

The fluctuations in worry levels since 2019 are largely driven by Democrats and Democratic-leaning independents, who became more worried, on average, about the six environmental problems in 2020 during the presidential campaign and are now less worried with Joe Biden as president. For their part, Republicans’ and Republican-leaning independents’ concern has been stable over the same period.

Majorities of Democrats, ranging from 51% to 69%, say they are worried a great deal about all six of the environmental threats, while no more than 40% of Republicans say the same. The party groups diverge the most in their concern about global warming, with 68% of Democrats and 14% of Republicans highly concerned.