Home›Activist›Sophia Mathur is one of Canada’s most high-profile climate activists. She’s also
Activist

Sophia Mathur is one of Canada’s most high-profile climate activists. She’s also

Sophia Mathur was just nine years old when she made her first lobbying trip to Parliament Hill, in 2016. Technically speaking, it was her mother, Cathy Orlando, who was the lobbyist, in her role as the head of Citizens’ Climate Lobby (CCL) Canada, but Mathur was a surprisingly engaged deputy. Mother and daughter went from office to office, politician to politician, and as the adults talked, Mathur would draw small pictures that she would usually then leave with the politicians. One of Mathur’s first drawings, which she made while in a meeting with Liberal MP Paul Lefebvre, still sits on the living room mantle of her house in Sudbury, Ont. It depicts a small cat, with the caption “A carbon tax is a purr-fect solution.”

Mathur is currently 14 years old, still a young person, of course, but also now one of the country’s most high-profile and effective climate activists. In November 2018, she became the first student outside Europe to join Greta Thunberg’s Fridays for Future movement, refusing to attend classes on Fridays as a protest against global climate action. A year later, she met Thunberg in New York City, where they appeared together on an Amnesty International climate activism panel and marched in the Global Climate Strike. Last year, she starred in the documentary CitizenKid: Earth Comes First and this past March appeared in yet another film, The Fight for Tomorrow. As for the carbon tax that Mathur’s been fighting for over the past five years? In March, despite the opposition of several Conservative premiers, the Supreme Court ruled that Ottawa, which implemented a revenue-neutral carbon tax in 2019, has the constitutional power to impose that price across the country. The Trudeau government plans to raise the floor of the price from the current $30 per ton to $170 per ton by 2030. Purr-fect.

READ: Those who suffer most from climate change did the least to cause it

Mathur was born in Sudbury in 2007 to Orlando and Sanjiv Mathur, an anesthesiologist. She is the youngest of three girls (both her older sisters are in their early 20s, one a nurse and the other studying occupational therapy). Orlando, a former high school teacher who ran a science outreach program at Laurentian University, was seven months pregnant with Sophia when, sitting in her living room, she heard the conclusions from the fourth report of the UN’s Intergovernmental Panel on Climate Change. “It said if we keep doing what we’re doing,” Orlando recalls, “the planet won’t be livable in 40 years. I lost the feeling in my legs. I got so scared and I just said, ‘Not on my watch.’ ” Four years later, she quit her job to volunteer full-time with the Canadian chapter of CCL and joined Al Gore’s Climate Reality Leadership Corps, where she was trained in climate science and activism.

A self-described “attachment parent,” Orlando brought all her kids along with her as she did this work. When Sophia was six years old, she accompanied her mother to CCL’s first national conference in Ottawa-Gatineau. After an overwhelmed, stressed Orlando retreated to a cloakroom to catch her breath, Sophia ran in after her, climbed into her lap and took her mother’s face in her hands. “You’re doing this for me, aren’t you?” she said. 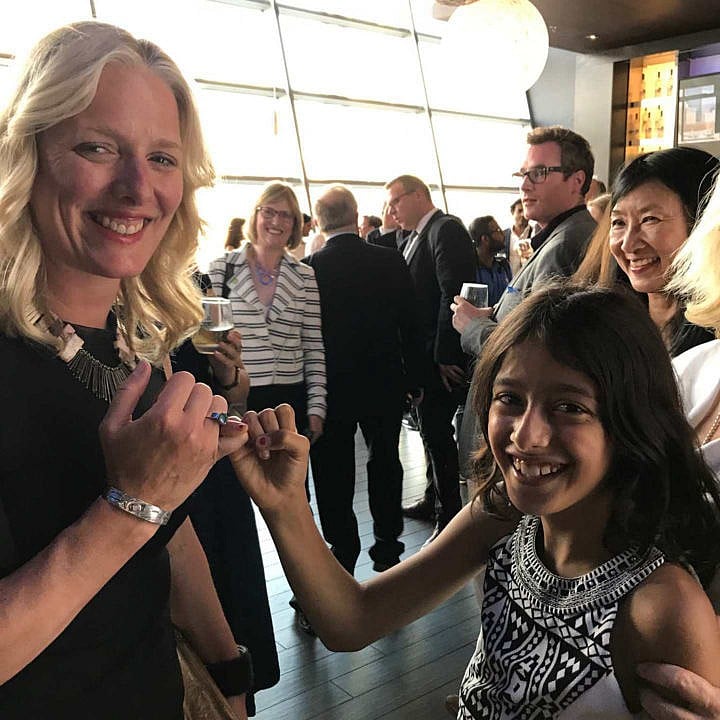 Mathur pinky swearing to tackle climate change with then Minister of Environment and Climate Change Catherine McKenna, in 2017 (Courtesy of Sophia Mathur)

Soon after, though, Sophia began doing the work for herself. She had grown up in a family of scientists, and scientists had repeatedly, gravely, said that climate change was a serious problem. “Science is truth,” she says, “and we need to follow the truth and take action.” She was also an extrovert and, in Orlando’s words, “fearless.” Having already spent so much time in the offices of public servants, she took access to her MPs and mayor for granted, and expected them to listen when she spoke. In 2017, she met…

Endangered ferrets get boost with 21 births at zoo