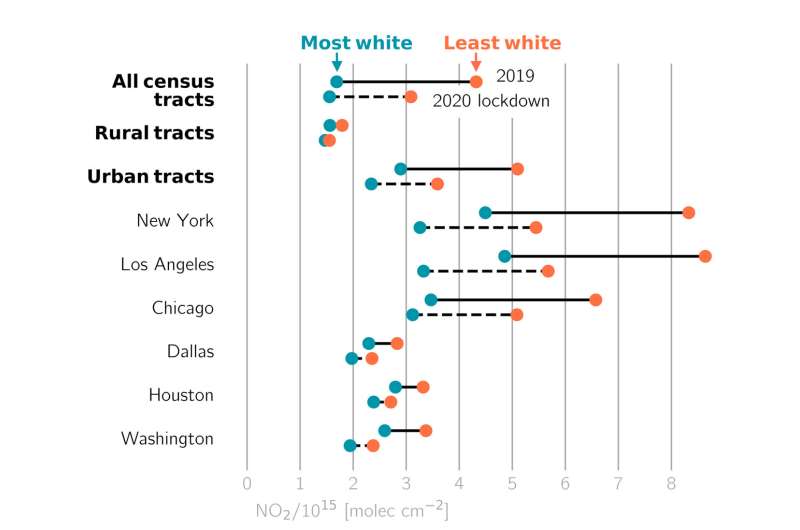 Drops in NO2 during the pandemic were unequal for the most white (blue dots) and least white (orange dots) neighborhoods in the largest metropolitan areas. The solid lines indicate pre-pandemic NO2 levels and the dashed lines NO2 levels during the height of pandemic-related lockdowns. Credit: Kerr et al. 2021

The coronavirus pandemic has changed the way we live, and several studies have documented how those widespread changes in human behavior have impacted the environment. NASA scientists and others using data from NASA and our partner satellites have shown that air pollution levels dropped significantly during COVID-19. A new, NASA-funded study, conducted by scientists at The George Washington University (GW) in Washington, D.C., zoomed in on the 15 largest metropolitan areas in the United States to see how the drop in air pollution differed from neighborhood to neighborhood. The paper was published July 20 in the journal Proceedings of the National Academy of Sciences.

We talked to the lead author on the study, Gaige Kerr, about how the COVID-19 pandemic led to better air quality—and how those improvements were unequal for people of different races, ethnicities and socioeconomic levels. Kerr is a research scientist at GW. The interview has been lightly edited for clarity.

What is nitrogen dioxide and how is it related to air quality?

Nitrogen dioxide, or NO2, is a trace gas in the atmosphere. It’s one of the six air pollutants regulated by the U.S. Environmental Protection Agency (EPA) under the Clean Air Act. Even though NO2 is only present in small amounts, it’s very harmful for human health and can trigger respiratory illnesses like asthma. NO2 also leads to the formation of ozone near Earth’s surface, another harmful air pollutant.

NO2 can come from natural things like lightning or microbes in the soil. But in cities, the majority of NO2 stems from human activity and fossil fuel combustion. Roughly 50% of the ambient NO2 comes from traffic emissions. The other large sources come from power plants, incinerators and factories.

What happened with NO2 levels when the COVID-19 pandemic triggered lockdowns in March 2020?

During COVID, we had the opportunity to see how taking many cars off of the road and planes out of the skies affected air pollution in the real world in this unintended experiment. We know from past research that there are NO2 pollution disparities based on several factors—most notably race, ethnicity and income—and that communities of color and lower socioeconomic status face much higher…

An EPA Update on the National Recycling Strategy