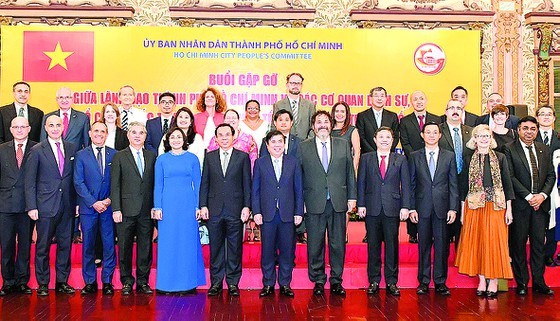 The statement was underlined by Secretary of the HCMC Party Committee Nguyen Van Nen at a meeting between HCMC’s leaders and Consuls General, and leaders of international organizations and economic-cultural offices of countries in the city on April 14.

He highly appreciated outstanding contribution of international friends to the building and development of HCMC; and affirmed that all successes of the city are always associated with their support and companionship.

The city will make all efforts to become an economic leading role of the whole country, the Party Chief added.

Speaking at the event, Chairman of the HCMC People’s Committee Nguyen Thanh Phong said that Vietnam has been one of the most successful countries in the world at containing the Covid-19 pandemic while maintaining economic growth.

The country has reached dual goals including the control of the Coronavirus pandemic and effective implementation of economic recovery programs.

Despite the Covid-19 outbreak causing a negative impact on trade and development, HCMC achieved a positive growth rate of 1.4 percent in 2020, contributed 22 percent to national GDP growth and donated 27 percent to the total State budget revenue.

Remittances to the city last year reached a record US$6.1 billion, an increase of 15 percent year on year.

The city’s chairman expressed his thanks for the companionship of Consuls General, and leaders of international organizations and economic-cultural offices of countries in the city in preventing and controlling the spread of the disease.

The municipal government has studied to build a project on turning HCMC into an international city and promote it as a worth-living city, a safe-dynamic-friendly destination for residents and international friends.

Regarding the future development plan of HCMC, Chairman of the municipal People’s Committee informed about projects attracting so much interest from investors, especially the smart city building project featuring four centers of a shared database, an open data ecosystem, a center for socioeconomic forecasts and simulation, and a smart operation center .

He also introduced a planning scheme of Thu Duc City, the highly interactive and innovative urban area to the East HCMC that is expected to be developed into the “Silicon Valley” in Vietnam.

Amendment to New Haven illegal vehicle ordinance will further crack down on ...