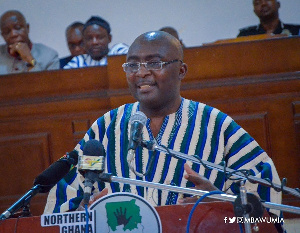 Vice President Dr. Mahamudu Bawumia has admonished the chiefs and people of Gonjaland to take keen interest in the preservation of the environment.

According to him, the Savannah Region is blessed with an abundance of natural resources and that government will give special attention to it.

Addressing the chiefs and people of Gonjaland at the 45th annual Congress of the Gonjaland Youth Association in Bole, Vice President Mahamudu Bawumia admonished the people to protect the environment by shunning away from activities of illegal mining and logging.

He indicated that the Nana Addo Dankwa Akufo-Addo-led government through the Lands and Natural Resources Ministry is working to regularize small-scale mining and other activities that will benefit the people.

Dr. Bawumia assured the chiefs and people of the region that work on the Yapei, Buipe and Daboya bridges will soon commence.

“The Savannah Region is endowed with abundance of natural resources aside the vast land which is good for agriculture and as a government, we are committed to ensuring that these resources are properly managed for the development of the area and the country at large.”

Dr Bawumia added: “Government has awarded contracts for the Yapei, Buipe and Daboya bridges to open up the place for socioeconomic development of the Northern, Savannah and North East regions.”

He urged the chiefs and people of Gonjaland to continue to live peacefully with their neighbours.

The President of the Gonjaland Youth Association, lawyer Mohammed Amin, said the Association will continue to engage government and other stakeholders towards the development of the region.

He appealed to the Local Government Ministry to create more districts in the Region.

“As a youth association, we join our chiefs in making a call to the Local Government Ministry to create some districts out of the existing ones while elevating some of them to Municipal status.”

Lawyer Amin also appealed to the youth to eschew politics of insults and other attitudes of disrespect which do not inure to the peace of the area.

For his part, Member of Parliament for the Bole-Bamboi Constituency Alhaji Yussif Sulemana, who spoke on behalf of the Savannah Regional MPs caucus, appealed to government to establish a teacher training college in the region.

He lamented the growing insecurity in the area, where people are murdered in cold blood, and called on the security agencies to up their surveillance.

Chairman for the occasion Kpengri-wura Sapara Kokoshechi Adam Zakaria stressed on the need for investment in the agricultural sector as the Region is endowed with arable lands.

He expressed optimism that any support from the Ministry of Food and Agriculture through the government’s Planting for Food and Jobs will improve the living conditions of the people.

The Gonjaland Youth Congress is organized annually to meet and plan the contribution of the youth towards the development of the region.

This year’s Congress is under the theme: ‘Beyond election 2020, uniting Gonjaland for Rapid Socioeconomic Development.’

How to Make Your Laboratory Greener for Environment Friendliness