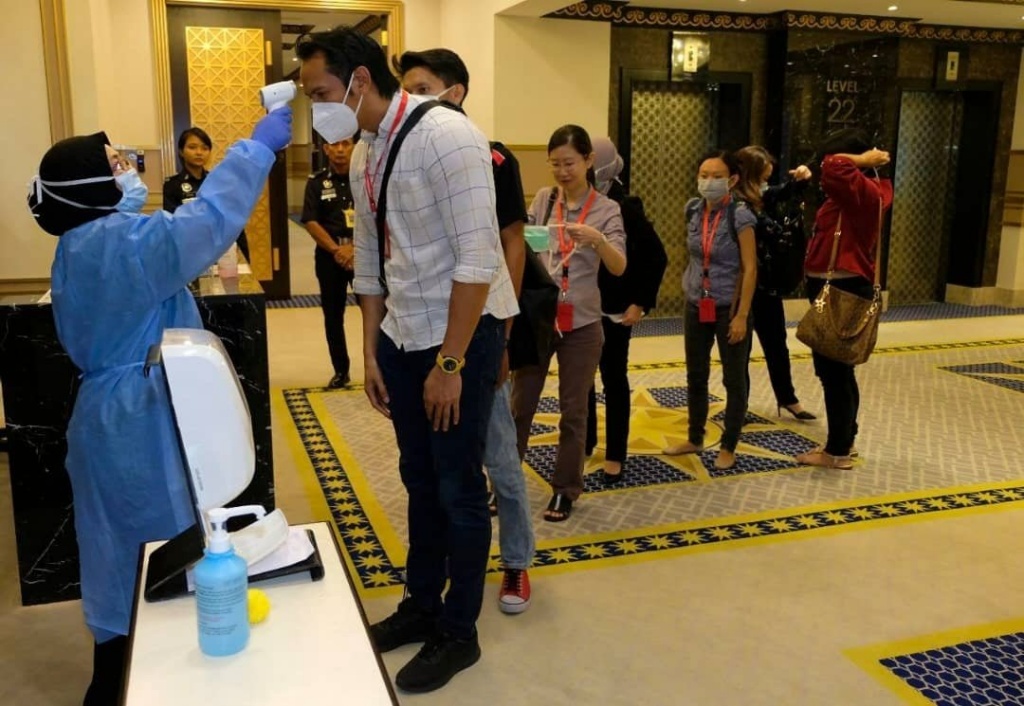 Journalists undergo temperature checks upon arrival at Wisma Bapa Malaysia in Kuching before going to a press conference, in this file photo taken several days after the Movement Control Order (MCO) was announced and enforced in March last year. — Photo by Muhammad Rais Sanusi

IN many parts of the world, the crocodiles have the law on their side. In Sarawak, they are protected under the Wild Life Ordinance 1998.

There is, however, no special legislation to protect another endangered species — the journalists.

Many of them are on the eve of extinction if their newspapers are folding up.

During the current war against Covid-19, the doctors, nurses and other health workers are indispensable.

Their job involves close proximity between humans who have health problems. That’s their mission in life – to save lives in accordance with the ‘Hippocratic Oath’.

If any of these frontliners gets infected by the virus, he or she is deemed to be a transmitter of that virus to their family members and neighbours.

If there are many doctors or nurses so infected, who else can fight the virus for the general population anymore? The whole country would have hospitals without doctors and nurses – only beds full of patients without anyone treating them.

We don’t want our country to be in such a situation, do we?

So, it is the duty and the responsibility of the other members of the public, you and me, to save the frontliners in order to save ourselves.

The next group of frontliners consists of the policemen and women. Those who are on duty stop every passing vehicle, check at close range whether or not the driver and his passengers are complying with the standard operating procedures (SOP) – wearing face-masks, observing physical or social distancing.

The Police Act does not protect them from the coronavirus.

Other frontliners are the teachers, the shopkeepers and those who man the counters at the government and company offices.

According to the researchers at the James Cook University, Queensland in Australia, the night shift workers are facing higher risk of Covid-19 (refer Bernama report on The Borneo Post – April 21, 2021).

The reporters work at night too. I hope they would be categorised as frontliners too so that they could get the right vaccine.

You don’t want empty radio and TV studios, closure of news stations, or press conferences without representatives of the mass media, do you?

Of what use are the subspecies – the desk-bound editors and columnists, without the foot soldiers?

Journalism is not a crime

The news gatherers regard a large crowd of people as a possible source of information of human and public interest. Through the medium of his paper, he shares with the public (the readers) the information that he has got. For this act of sharing, in some countries, he is treated as a bane in society. Many powerful politicians in many countries regard journalism as a major crime.

Any moment of the day and night, journalists are working in a hostile environment at several fronts. During a war, they get embedded among the troops. They don’t carry arms; even if they are given the guns or the grenades, they wouldn’t know what to do with them. Their profession does not allow them to kill people, but many of them get killed for being journalists. Many of them have got killed with the pen, notepads, camera in their hands.

The news of their deaths is not worth a headline in their own papers the next day.

Yet there is another source of danger – the law of libel and sedition. Politicians call for press conferences in order to advertise their policies. The journalists assigned to cover press conferences are trained to ask questions about issues, no matter how sensitive they may be.

He scribbles notes, rushes off to the office, types a fair copy of his report, delivers it to his editor and leaves for the evening meal at midnight, nay, his breakfast.

When they report about scandals involving…

A Just Transition? On Brooklyn’s Waterfront, Oil Companies and Community

A Danger To The Environment – The Organization for World Peace