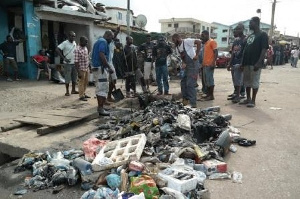 Residents have been advised to desist from environmental pollution

Members of Association of Concerned Citizens of Tema site-19 have embarked on community sensitization programme for residents to adhere to basic environmental protection tenets to save humans and plants.

The exercise formed part of the association’s efforts to create awareness aimed at curbing the growing rate of environmental degradation, pollution and poor sanitation.

He explained that, apart from the lawless canker that contributed to the unpleasant stench in the area, perpetrators of such acts could face imprisonment, if found guilty.

He, therefore, advised the residents to desist from environmental pollution and the construction of concrete slabs along the gutters for their container shops.

He urged them to seek approval from city authorities before doing so.
Mr Brown Owusu, chairman of the association told Ghana News Agency on the sidelines of the exercise that, “our main goal is to bring sanity to the area”.

He said residents who failed to comply with the directives of the association and continued to involve in activities that threatened others shall face the wrath of the assembly.

He cautioned landlords in the area, to provide toilet facilities in the houses to discourage tenants from engaging in open defecation.

Joshua Manab, an officer of Tema Metropolitan Assembly, under the Environmental Health Unit, admonished all residents to embrace the call for sanity.

He said the assembly had become keen to solve the issues of environmental nuisance in the metropolis, stating that, anybody found defaulting the by-laws of the assembly would be sanctioned by a court of competent jurisdiction.

When It Comes to Ganga’s Health, the Centre Has Ignored Several Key ...